The holiday we shouldn't have had…

About three months ago, Sham and I booked a week and a half off work. This wasn't with the usual excitement of planning a holiday…. This was the week and a half that included what should have been Hayden’s due date (thank you for the lovely messages and cards) and my birthday – one I REALLY didn't want to celebrate.

We hadn't thought about how we were going to spend it, we just knew we needed an escape from everyday life for that time.

We ruled out going overseas based on the fact that I still haven’t applied for my Australian passport (too much other stuff going on!)… we considered various places around Australia, but in the end, we decided to do something a bit different… we decided on a NSW road trip! We booked some of the accommodation, but gave ourselves the luxury of being able to stop in any of the towns along the way for a few hours or even the night if we wanted to. It was great loading up the car without any weight restrictions… no worrying about which shoes I had to leave behind (I actually only took a pair of trainers and some flip flops as I knew this was going to be a relaxed, no fancy dinners type of holiday), Sham took his golf clubs, we packed the cooler bags full of snacks (including a home made banana bread!) and we were ready to hit the road!

The trip officially started on Thursday… and approximately 2.5km from home, we made our first stop… the obligatory road trip McDonald's!

The next stop wasn't for another three hours… we were going to stop at Port Stephens, but Tea Gardens sounded so pretty, we decided to stop there! Thanks to my trusty iPhone, we arrived at The Boathouse Resort. It was 5pm and Stuart the manager was just closing up reception as we walked in to see if they could put us up for the night. He was lovely and gave us an apartment for the night, told us about the local restaurants and pubs and left us to get settled (or as settled as you can for one night…) We walked to the local chip shop and enjoyed dinner on our balcony with this lovely view! 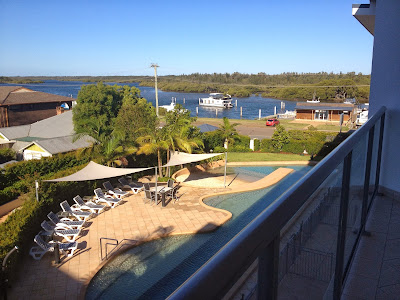 The next morning, after we checked out, Sham repacked the car so that his golf clubs were easily accessible, as Stuart had told him that the local golf course was great. Unfortunately, it wasn't to be – there were no tee off times available until 3pm, and we needed to get back on the road….

Next stop Seal Rocks. A lovely beach at the end of a long, winding dirt track! Worth the drive though! We stopped for a picnic lunch before heading through Harrington to Crowdy Head to see the views from the light house.

We had used Airbnb to book two nights in a town called Urunga - just outside Coff's Harbour. The place had good reviews, but we weren't expecting it to be as nice as it was! 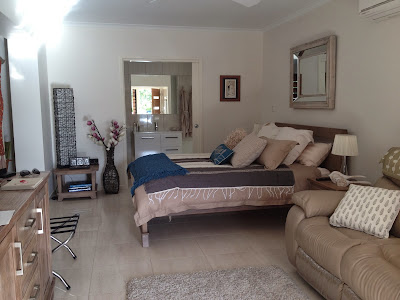 The owners of a big house had turned their garage into a granny flat for her parents and when they weren't using it, she rents it out... she was really nice and told us lots about the area and recommended a nearby town called Bellingen for lunch and shopping.
Our second day and night in Urunga was a bit of a write off as it rained - A LOT! It meant that Sham missed out on another round of golf, but we stayed indoors watching films and having an afternoon nap... so no complaints from me!
While we were stuck indoors, Byron Bay (our next stop) was being battered by storms and golf ball sized hailstones! By the time we arrived on the Sunday, it had passed, but the locals were still cleaning up the mess. 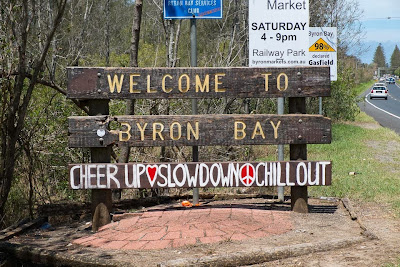 We stayed in a lovely villa just outside of Byron bay in a place called Ewingsdale. It was really quiet and yet a five minute drive from the hustle and bustle of Byron and the beach.


We loved Byron Bay so much, we extended our stay there (we were going to do a stop over on the drive back, but Sydney had some storms so we decided to not bother!)

We didn't do much in Byron - walks on the beach, eating lovely food, strolling around markets, a couple of rounds of golf for Sham (finally!) and a few massages for me! It really was a fantastic holiday. 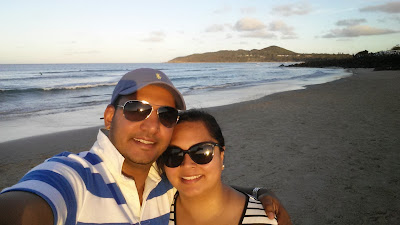 Our drive back as all in one go (around 11 hours including a few pit stops). 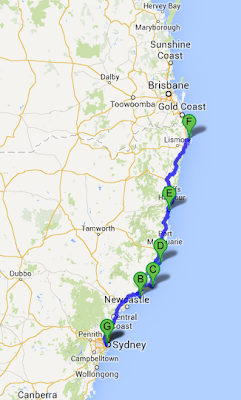 The night before we set off, I had a text from my boss’ boss:


"Enjoy your holiday and the healing and reflection it brings"... this was the perfect way to describe the holiday I was dreading!

To finish on a more happy note, Sham and I found the winner for our favourite game of "find the funny signs" - what do you think??

Something different for the weekend!

I recently had to go to Perth for work. I managed to time the trip cleverly around an event that we were sponsoring (as Marketing Manager, I get to decide what we sponsor!). The event was a comedy and music festival at Rottnest Island. I charmed the organisers into giving us accommodation and tickets for an additional two people (we had already given away 12 tickets as prizes) and we booked Sham's flight to Perth.

The festival was great fun - we got to see a number of local and international comedians, a few Australian bands we had never heard of, and some Quokkas! These strange looking animals are obviously used to sharing the island with humans, because they were really friendly (not that either of us would actually touch them!) 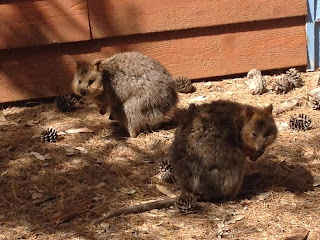 Our "accommodation" was pretty basic (yes, those are 2 bunk beds you can see on the right of the picture!!!). But it was clean and the location was fantastic. We were only there for one night, and considering we are planning on camping over the summer, this was a good introduction. It might surprise you to know, I was more comfortable than Sham was! 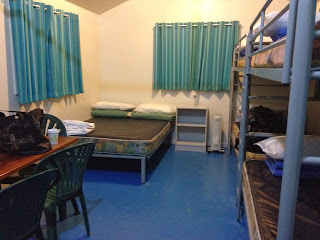 Waking up to this view made it worth it though... 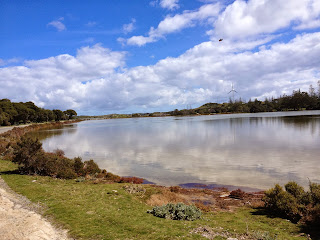 It was nice to get away from the city for a short break and see something new... Although it was a flying visit for Sham as he left on Monday to get back to work while I stayed a few more days to work in our office in Perth.

... four different visas, endless forms, an interview and test later, we are proud to officially call ourselves Aussies!! 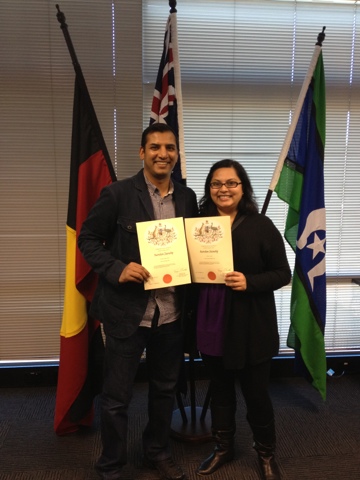 Wish you were here?? 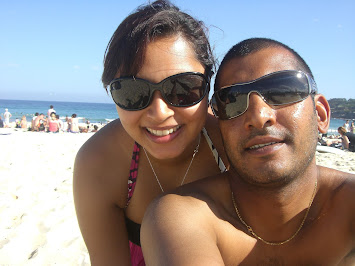